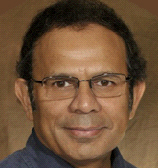 ABSTRACT
Recent advancements in healthcare monitoring technologies, micro- and nano-fabrication processes coupled with the prolific growth of the wireless sensor network technologies have opened up new and innovative applications of wireless technology in healthcare.  An integral component of the next generation healthcare technologies will require continuous monitoring of vital information via wireless medium which will facilitate in-home care services thereby reducing the need for hospital visits. The biomedical sensors can be categorized as wearable or implantable. While the wearable sensors are placed outside the body, the implantable types are placed underneath the skin or inside the body cavity typically via surgical means. Wearable sensors either use optical mans for detection and quantification a few vital information such as pulse rate, blood oxygen level etc. or by transdermal means for monitoring of blood glucose level for diabetic patients. Implantable sensors acquire the information on the vital physiological phenomena such as glucose, lactate, pH, oxygen, etc. A typical biomedical implantable sensor consists  of electrochemical transducer which generates electrical signals that correspond to the concentration of a particular analytes of interest, readout electronics to provide output in the form of a current (amperometric) or a voltage (voltametric) signal and associated circuits for signal processing and data transmission. Powering the circuit is always a crucial design issue for biomedical sensors. Batteries are not recommended to be used in implantable sensors which can come in contact with blood resulting in serious health risks. For long-term reliable detection of various biological signals in biomedical applications it is essential to have excellent signal sensitivity of the biomedical sensors and adequate power savings for the associated electronic circuits. The advancement of wireless technology has led to the development of the recently proposed comprehensive patient monitoring systems such as wireless body area network (WBAN) and body sensor network (BSN and a new healthcare concept known as telemedicine has emerged which facilitates the monitoring of in-home patient care by incorporating smart medical devices and WBAN. The talk will include a discussion on various low-power circuit design techniques for biomedical sensors as well as the recent development of various biomedical wireless technologies for new patient-centric healthcare paradigm.

SPEAKER BIOGRAPHY
Dr. Syed Kamrul Islam received his bachelor’s degree in Electrical and Electronic Engineering from Bangladesh University of Engineering and Technology and M.S. and Ph.D. degrees in Electrical Engineering from the University of Connecticut. He is currently a Professor and the Associate Head of the Department of Electrical Engineering and Computer Science. Dr. Islam is leading the research efforts of the Analog VLSI and Devices Research Group at the University of Tennessee.  As an affiliated faculty member of The University of Tennessee Center for Environmental Biotechnology, he is leading the efforts to develop Biophotonic Biosensors using genetically engineered whole-cell bioreporters on integrated circuits. His current research interests are: semiconductor devices, high temperature electronics, analog and mixed-signal circuit design, bio-microelectronics, and nanotechnology. Dr. Islam is currently holding John W. McConnell Professorship in the Department of Electrical Engineering and Computer Science and has previously received John W. Fisher Professorship for academic leadership skill, eta kappa nu outstanding teacher award, Moses E. and Mayme Brooks Distinguished Professor award, Min Kao Faculty Fellowship award, College of Engineering Research Fellow award and the University of Tennessee Citation for Research and Creative Achievement. 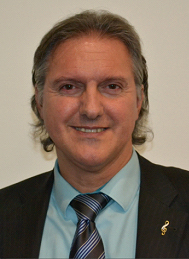 ABSTRACT
Integrated electrochemical Nano-Bio-Sensors [1] for diagnosis and/or treatment of patients with specific physiological conditions (e.g., heart, cardiovascular, cancer diseases) or convalescents is a key factor to provide better, more rationale, effective and ultimately low-cost health care also at home. The ultimate goal of improved health care on those subjects is the extension of the patients’ autonomy, the possibility for auto-monitoring, the improvement of their comfort levels and their integration into everyday life. Some systems for on-line monitoring are available in the market. They use wearable devices (accelerometers, heartbeat monitoring system, etc). However, all these systems do not measure the human metabolism at molecular level (metabolites). The only available real-time, implantable/wearable systems for metabolic control are limited to glucose monitoring and used only for diabetic patients. However, electrochemical sensors may address so many other molecules, which have crucial relevance in human metabolism in chronic patients. So far, there are no available integrated nano-bio-systems for multi-metabolites, real-time, remote monitoring of the human metabolism. Thus, the aim of this plenary talk is to present an innovative concept for multi-panel, highly integrated, fully implantable, remotely powered and real-time monitoring systems for human metabolism at molecular level. The considered metabolic molecules will be glucose, lactate, glutamate, ATP [2], and anticancer drugs as well as anti-inflammatory ones [3]. In case of drugs, the specificity of electrochemical sensors is improved at system level [4]. The proposed nanotechnology will be based on carbon nanotubes to improve the sensors performance [3, 5]. To pursue their detection, innovative VLSI solutions [6] are discussed including the system remote powering [7]. The new approach is obtained by integrating nano/bio/micro/CMOS/SW/RF systems in three devices: (i) a fully implantable sensors array for data acquisition; (ii) a on-skin intelligent-patch for remote powering and signal processing; (iii) a wearable station (a mobile phone) for data collection, elaboration and storage. The major presented breakthroughs are in the areas of: (i) nano-sensors; (ii) signal analysis; (iii) HW/Bio co-design; (iv) multi-panel metabolites detection; (v) fully implantable sensors; (vi) remote powering; (vi) minimally-invasive biomedical implants. System validation with in-vivo experiments on animal models is presented too [8] including packaging issues [9].

SPEAKER BIOGRAPHY
Sandro Carrara is faculty (MER) at the EPFL in Lausanne (Switzerland). He is former professor of optical and electrical biosensors at the Department of Electrical Engineering and Biophysics (DIBE) of the University of Genoa (Italy) and former professor of nanobiotechnology at the University of Bologna (Italy). He holds a PhD in Biochemistry & Biophysics from University of Padua (Italy), a Master degree in Physics from University of Genoa (Italy), and a diploma in Electronics from National Institute of Technology in Albenga (Italy). He is founder and Editor-in-Chief of the journal BioNanoScience by Springer, Topical Editor of the IEEE Sensors Journal, and Associate Editor of IEEE Transactions on Biomedical Circuits and Systems. He is a member of the Board of Governors (BoG) of the IEEE Circuits and Systems Society. He is member at large of the IEEE Sensors Council. He has been appointed as CASS Distinguished Lecturer for the years 2013-2014. His scientific interests are on electrical phenomena of nano-bio-structured films, and include CMOS design of biochips based on proteins and DNA. He has more then 200 scientific publications and 12 patents. He has several Top-25 Hottest-Articles (2004, 2005, 2008, 2009, and two times in 2012) published in highly ranked international journals such as Biosensors and Bioelectronics, Sensors and Actuators B, IEEE Sensors journal, and Thin Solid Films. His work received a NATO Advanced Research Award in 1996 for the original contribution to the physics of single-electron conductivity in nano-particles, three Best Paper Awards at the IEEE PRIME Conference in 2015 (Glasgow), in 2010 (Berlin), and in 2009 (Cork), a Best Poster Award at the Nanotera workshop in 2011 (Bern), and a Best Poster Award at the NanoEurope Symposium in 2009 (Rapperswil). He also received the Best Referees Award from the journal Biosensor and Bioelectronics in 2006. From 1997 to 2000, he was a member of an international committee at the ELETTRA Synchrotron in Trieste. From 2000 to 2003, he was scientific leader of a National Research Program (PNR) in the filed of Nanobiotechnology. He was an internationally esteemed expert of the evaluation panel of the Academy of Finland in a research program for the years 2010-2013. He has been the General Chairman of the Conference IEEE BioCAS 2014. 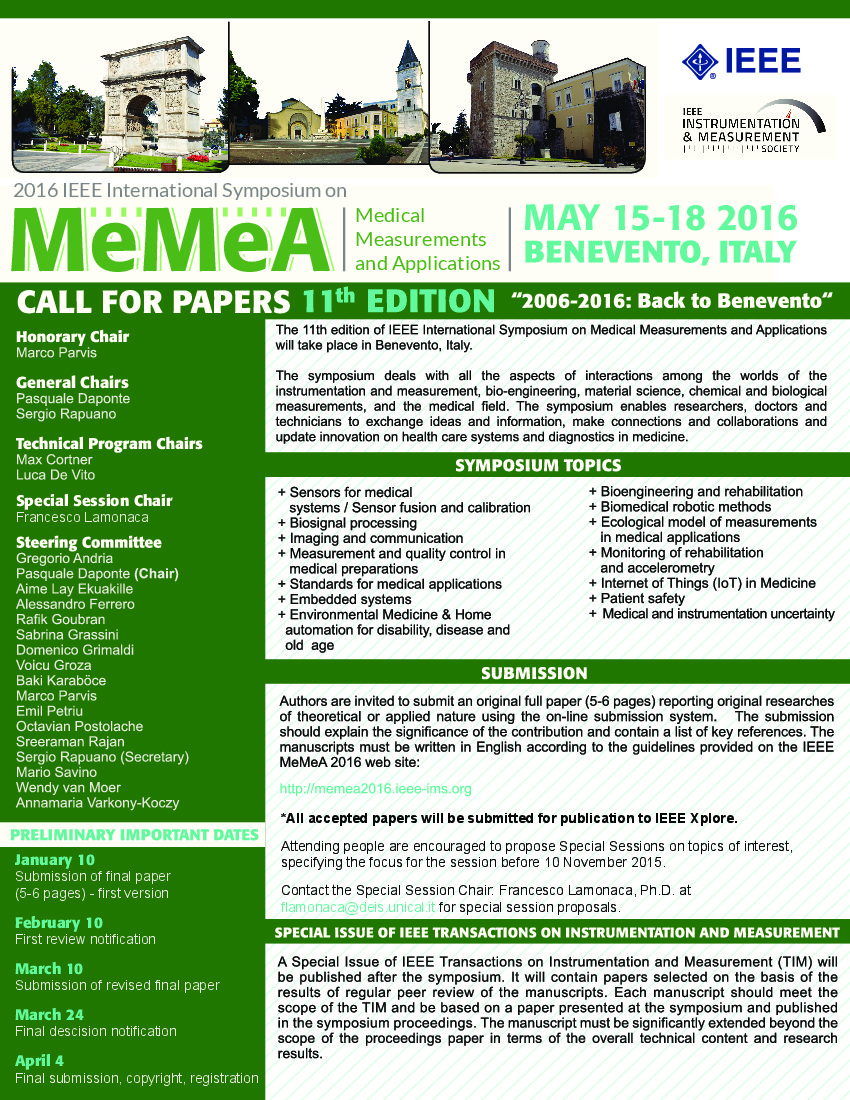